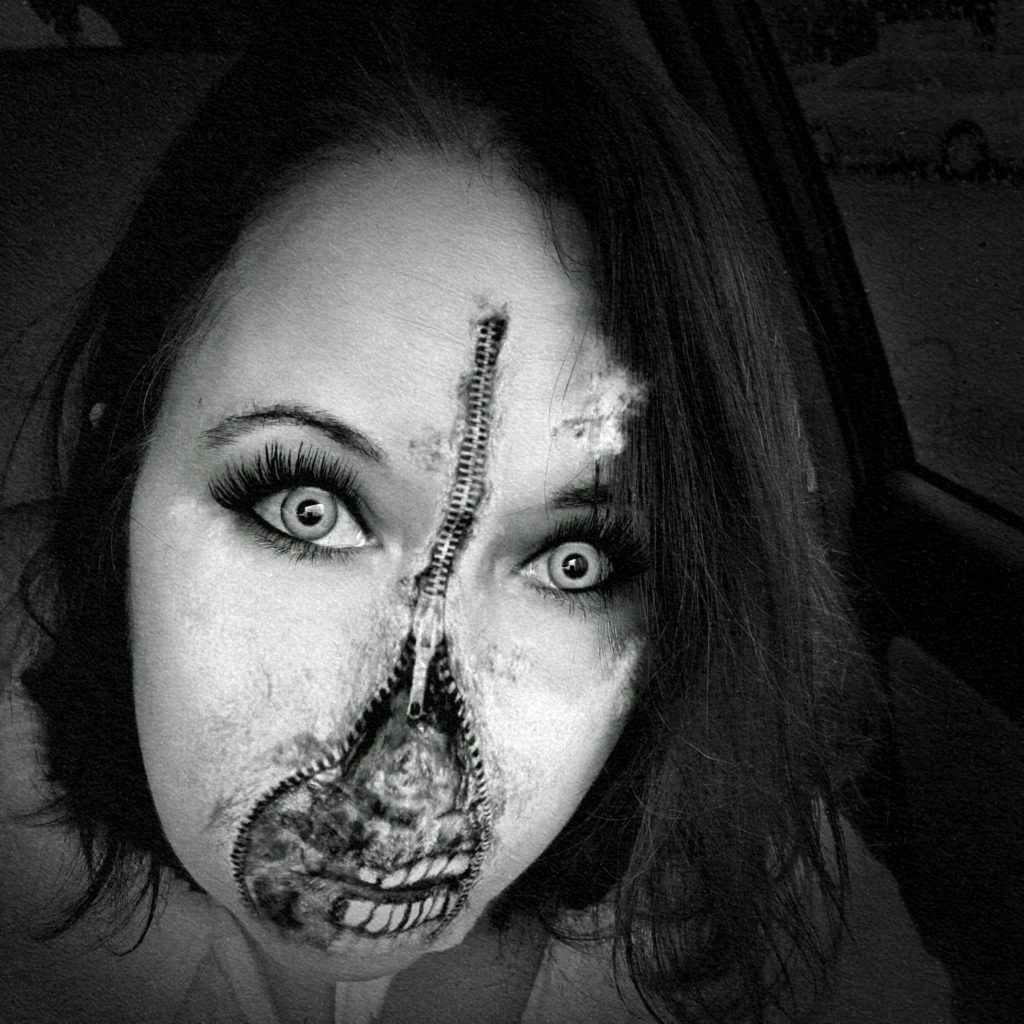 Andrea Koerner ~ Not Myself Today

Thro’ the ghoul-guarded gateways of slumber,
Past the wan-moon’d abysses of night,
I have liv’d o’er my lives without number,
I have sounded all things with my sight;
And I struggle and shriek ere the daybreak, being driven to madness with fright.

I have whirl’d with the earth at the dawning,
When the sky was a vaporous flame;
I have seen the dark universe yawning,
Where the black planets roll without aim;
Where they roll in their horror unheeded, without knowledge or lustre or name.

I had drifted o’er seas without ending,
Under sinister grey-clouded skies
That the many-fork’d lightning is rending,
That resound with hysterical cries;
With the moans of invisible daemons that out of the green waters rise.

I have plung’d like a deer thro’ the arches
Of the hoary primoridal grove,
Where the oaks feel the presence that marches
And stalks on where no spirit dares rove;
And I flee from a thing that surrounds me, and leers thro’ dead branches above.

I have stumbled by cave-ridden mountains
That rise barren and bleak from the plain,
I have drunk of the fog-foetid fountains
That ooze down to the marsh and the main;
And in hot cursed tarns I have seen things I care not to gaze on again.

I have scann’d the vast ivy-clad palace,
I have trod its untenanted hall,
Where the moon writhing up from the valleys
Shews the tapestried things on the wall;
Strange figures discordantly woven, which I cannot endure to recall.

I have peer’d from the casement in wonder
At the mouldering meadows around,
At the many-roof’d village laid under
The curse of a grave-girdled ground;
And from rows of white urn-carven marble I listen intently for sound.

I have haunted the tombs of the ages,
I have flown on the pinions of fear
Where the smoke-belching Erebus rages,
Where the jokulls loom snow-clad and drear:
And in realms where the sun of the desert consumes what it never can cheer.

I was old when the Pharaohs first mounted
The jewel-deck’d throne by the Nile;
I was old in those epochs uncounted
When I, and I only, was vile;
And Man, yet untainted and happy, dwelt in bliss on the far Arctic isle.

Oh, great was the sin of my spirit,
And great is the reach of its doom;
Not the pity of Heaven can cheer it,
Nor can respite be found in the tomb:
Down the infinite aeons come beating the wings of unmerciful gloom.

Thro’ the ghoul-guarded gateways of slumber,
Past the wan-moon’d abysses of night,
I have liv’d o’er my lives without number,
I have sounded all things with my sight;
And I struggle and shriek ere the daybreak, being driven to madness with fright.