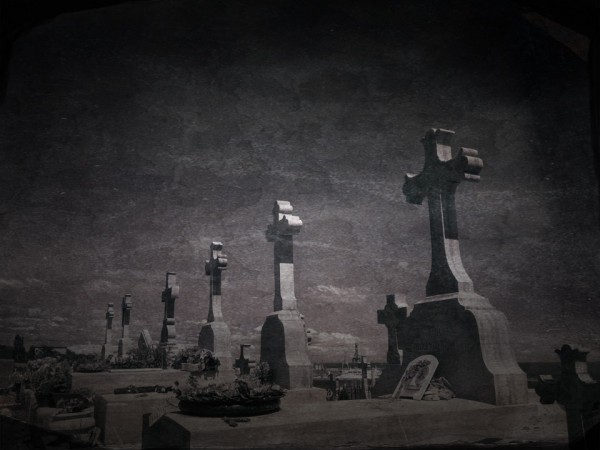 On the black gallows, one-armed friend,
The paladins are dancing, dancing
The lean, the devil’s paladins
The skeletons of Saladins.

Sir Beelzebub pulls by the scruff
His little black puppets who grin at the sky,
And with a backhander in the head like a kick,
Makes them dance, dance, to an old Carol-tune!

And the puppets, shaken about, entwine their thin arms:
Their breasts pierced with light, like black organ-pipes
Which once gentle ladies pressed to their own,
Jostle together protractedly in hideous love-making.

Hurray! the gay dancers, you whose bellies are gone!
You can cut capers on such a long stage!
Hop! never mind whether it’s fighting or dancing!
– Beelzebub, maddened, saws on his fiddles!

Oh the hard heels, no one’s pumps are wearing out!
And nearly all have taken of their shirts of skin;
The rest is not embarrassing and can be seen without shame.
On each skull the snow places a white hat:

The crow acts as a plume for these cracked brains,
A scrap of flesh clings to each lean chin:
You would say, to see them turning in their dark combats,
They were stiff knights clashing pasteboard armours.

Hurrah! the wind whistles at the skeletons’ grand ball!
The black gallows moans like an organ of iron !
The wolves howl back from the violet forests:
And on the horizon the sky is hell-red…

Ho there, shake up those funereal braggarts,
Craftily telling with their great broken fingers
The beads of their loves on their pale vertebrae:
Hey the departed, this is no monastery here!

Oh! but see how from the middle of this Dance of Death
Springs into the red sky a great skeleton, mad,
Carried away by his own impetus, like a rearing horse:
And, feeling the rope tight again round his neck,

Clenches his knuckles on his thighbone with a crack
Uttering cries like mocking laughter,
And then like a mountebank into his booth,
Skips back into the dance to the music of the bones!

On the black gallows, one-armed friend,
The paladins are dancing, dancing
The lean, the devil’s paladins
The skeletons of Saladins.

—Dance of the Hanged Men by Arthur Rimbaud

I love the dead by Alice Cooper